How We Fund the Government Matters…A Lot

A recent paper by the non-partisan Congressional Budget Office (CBO) reiterates two points The Buckeye Institute has made for years (see here, here, and here): (1) how governments raise the money they spend matters; and (2) taxes on consumption are less harmful than taxes on income or capital.

As the Ohio General Assembly weighs options to pay for services, it must remember that the tax levers it pulls to fund government programs matter because people react to different taxes, well, differently. And those reactions affect how people work, spend, save, and invest their money—how they live their financial lives. Thus, policymakers should pursue tax policies that have the least disruptive, distorting effect and allow families, businesses, and tax payers get the most for their collective tax dollars. Tax policy should strive to do the least harm.

Studies have shown that taxes on capital—e.g., corporate income taxes and Ohio’s commercial activity tax—tend to be the most harmful taxes because they penalize investment, harm innovation, pull resources from more productive sectors, increase the cost of doing business, and ultimately harm economic growth. As the CBO notes, “economic distortions of taxes on capital are generally viewed as being larger than those of labor income taxes”—that is, they distort financial decision-making and create disincentives to save and invest.

The second most harmful, disruptive taxes, according to research from the Organization for Economic Cooperation and Development, are personal income taxes. These taxes penalize work and productivity, and reduce household income.

The least harmful taxes are levied on consumption—e.g., sales taxes. According to the CBO, consumption taxes “are likely to have the smallest effects on saving and work decisions” and “are generally more efficient than income taxes because they do not distort saving decisions by altering the return on saving.” Put differently, consumption taxes are less wasteful taxes—they are less harmful to economic growth and do not directly penalize work and investment. Recent research confirms that shifting away from personal income taxes toward consumption taxes will likely improve economic output—because people respond to different taxes, yes, differently.

The CBO modeled how different labor and income taxes affect economic growth, and discovered that flat income taxes at the national level promote more economic growth than progressive income taxes. (See Figure 1.) Unfortunately, more than 40 percent of the United States federal tax revenue comes from taxing income. France, Austria, and South Korea, by contrast, raise less than a quarter of their revenue from income taxes, wisely collecting a higher percentage of revenue from taxes similar to sales taxes. The CBO’s report confirms that how governments raise money for government programs matters just as much as how they spend money on government programs. 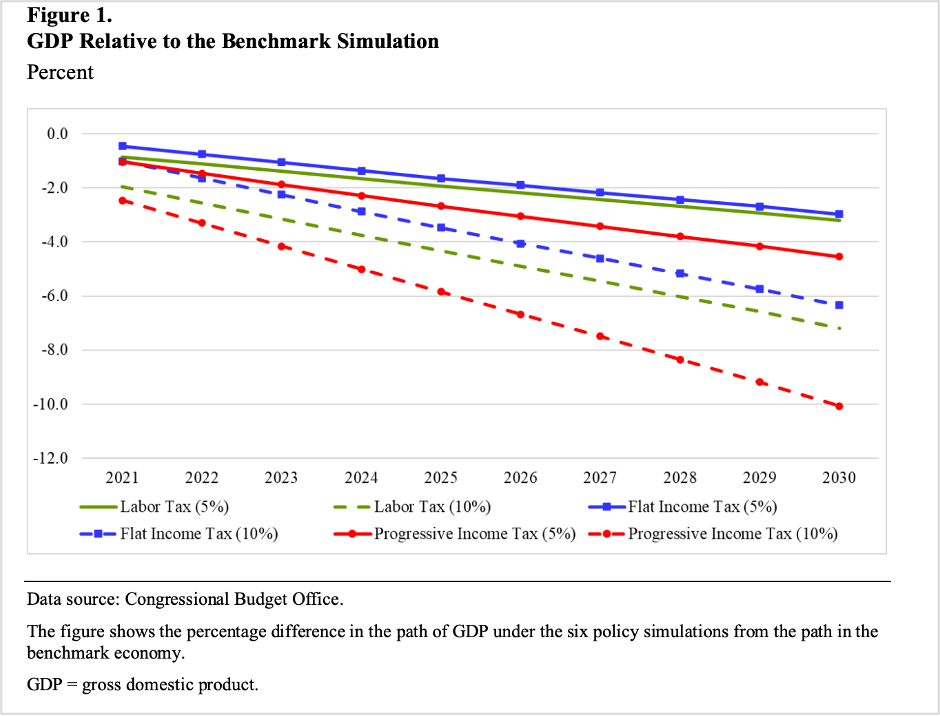 Accordingly, Ohio policymakers should shift Ohio revenue-raising toward consumption-based taxation like the sales tax, and away from taxes like the commercial activity tax that penalize investment and syphon capital from businesses. And they should be wary of the penalty that progressive income taxes impose on economic growth—i.e., fewer jobs, lower wages, less household discretionary income, and slower economic growth—before rejecting a less progressive income tax.

The CBO has confirmed what we and other economists have explained time and again: Taxes—and how governments levy them—matter.