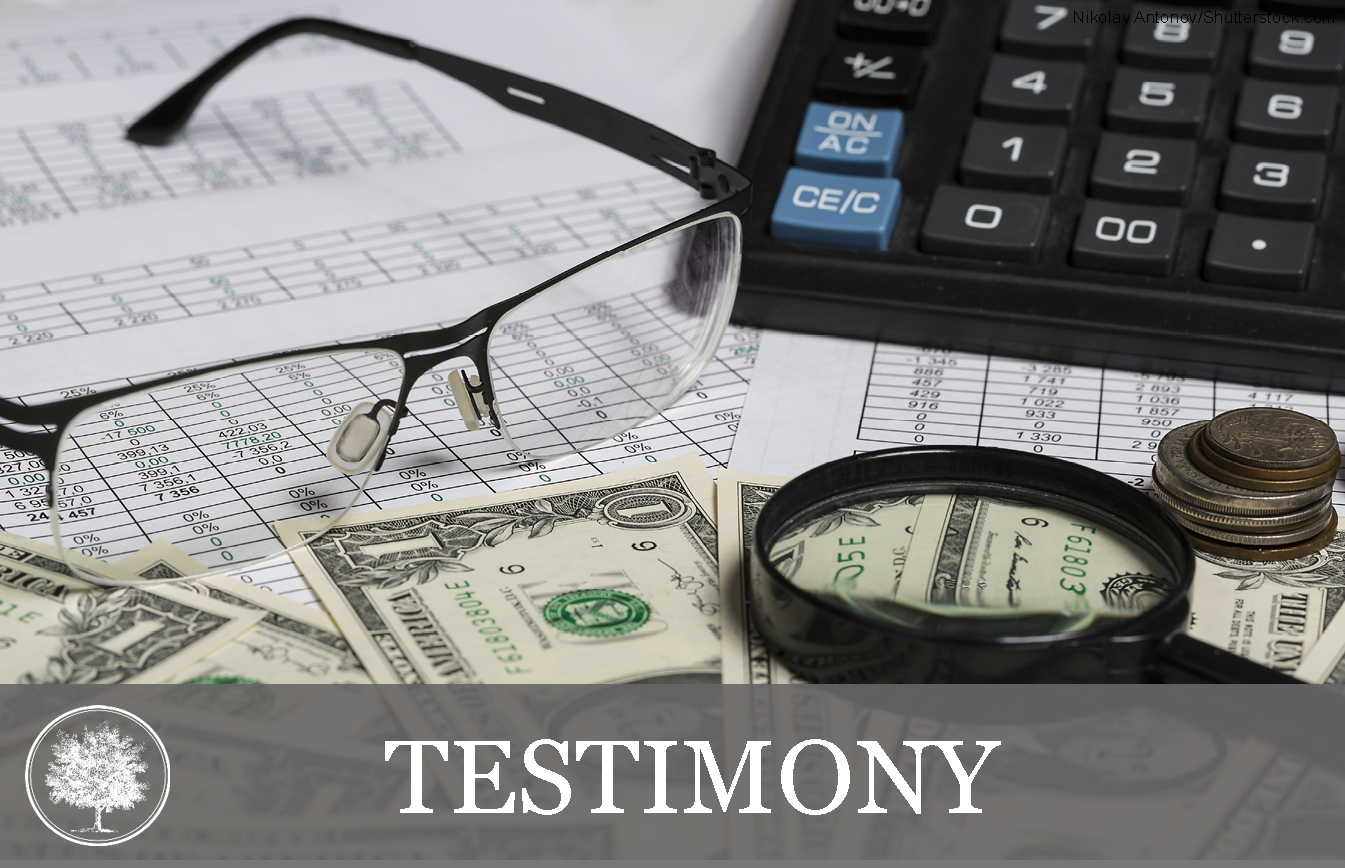 “State budgets are always about more than just dollars and cents. They represent more than simply funding state programs. The state budget process gives legislators and policymakers the chance to adopt policy preferences and priorities for the next two years,” said Lawson, research fellow at The Buckeye Institute. “That’s a golden opportunity to pursue meaningful reform that shouldn’t be missed.”

Building on The Buckeye Institute’s 2017 Piglet Book, and commentary written throughout the budget process (What the Ohio Senate Should Do with the Biennial Budget and House Substitute Budget: A Missed Opportunity for Bold Reform), Lawson outlined areas where the Ohio Senate can improve the budget and provided specific policy recommendations for the members to consider.

Lawson encouraged the Senate to consider the following:

Embracing the governor’s education funding policies and changing the “safe harbor” provisions so that the EdChoice scholarship program functions as designed;

Adopting most of the House of Representative’s Medicaid provisions—except for returning to the governor’s managed care proposal regarding the Aged, Blind, and Disabled community;

Adopting the governor’s proposed budget for the Department of Rehabilitation and Correction, especially the Targeted Community Alternatives to Prison program’s expansion;

In concluding his testimony, Lawson praised the reforms lawmakers have made that have improved Ohio’s economy. “Despite economic headwinds and clouds still looming along the horizon, Ohio has improved its prospects for job- and income-growth. As the first green shoots of growth begin to blossom, the biennial budget provides Senators with the perfect opportunity to set a bold course for Ohio’s prosperity.”

Thank you, Chairman Oelslager, Vice Chair Manning, Ranking Member Skindell, and members of the Committee for the opportunity to testify today regarding the biennial budget.  My name is Greg R. Lawson, and I am the research fellow at The Buckeye Institute for Public Policy Solutions here in Columbus.

State budgets are always about more than just dollars and cents. They represent more than simply funding state programs. The state budget process gives legislators and policymakers the chance to adopt policy preferences and priorities for the next two years.

That’s a golden opportunity to pursue meaningful reform that shouldn’t be missed. The Buckeye Institute believes that the current budget proposal up for your consideration requires a number of critical changes in order to take full advantage of this biennial opportunity to make Ohio more prosperous. Our recommendations include changes to government spending, tax and education policies, Medicaid, and local government policies.

We would encourage the Senate to consider the following:

Embracing the Governor’s education funding policies and changing the “safe harbor” provisions so that the EdChoice scholarship program functions as designed;

Adopting most of the House of Representative’s Medicaid provisions—except for returning to the Governor’s managed care proposal regarding the Aged, Blind, and Disabled community;

Adopting the Governor’s proposed budget for the Department of Rehabilitation and Correction, especially the Targeted Community Alternatives to Prison (TCAP) program’s expansion;

With the Committee’s permission, I will explain these recommendations in more detail.

The House of Representative’s budget appears to reduce Governor Kasich’s budget proposal by $12.8 billion over the fiscal years (FY) 2018-19. Unfortunately, much of the apparent reduction is unlikely to be realized. More than 96 percent of the House’s on paper reductions manifest in two areas: a fiduciary pass-through account that collects municipal income taxes in order to redistribute them; and Medicaid.

First, the Governor’s budget proposed a large increase to this account as part of the Governor’s proposed business net-taxes filings. The House modified that proposal and thus reduced the Governor’s expected appropriations by $944 million.

Second, the House budget calls for significant reductions in Medicaid spending that, in our view, are unlikely to materialize. The House appropriates $5.6 billion less than the Governor proposed for FY18, and $5.8 billion less for FY19. This intentional underfunding dovetails nicely with the House’s new “guard rails” on the Medicaid program that will require Controlling Board approval every six months in order to increase Medicaid spending, and assurances that the Administration is pursuing Medicaid reforms, including Healthy Ohio and other state innovation waivers.

We agree with these efforts to tether the “Pac-Man” of Ohio’s budget, but we assume that the Administration will seek those waivers and that the Controlling Board will therefore release most of the Medicaid funds. Consequently, the House’s “reductions” will likely prove illusory.

Accordingly, we believe that further reductions in state spending are needed to keep Ohio’s budget in the black and allow for meaningful tax reform. The Buckeye Institute urges renewed focus on spending outside core government services, namely, spending associated with the arts, marketing assistance for Ohio’s grape industry, and other examples of earmarks and public spending on private businesses that effectively allows the government to pick “winners and losers” in the marketplace.

The Buckeye Institute has long argued that Ohio should eliminate its personal income tax, and Governor Kasich has kept his promise to reduce the burden of the income tax on all Ohio families, most recently with a 6.3 percent reduction in income tax rates in 2015.

In 2016, Ohio’s per capital labor income, per capita investment income, and the employed population grew faster than in most Midwest states due, in no small part, to the Administration’s tax cuts that also helped Ohio’s per capita economic output outperform the national average.

Although we agree with the general direction of Mr. Kasich’s tax policy, we differ on a few specifics.

Like the Governor, we want Ohio’s small businesses eventually to pay no income tax, but the current small business tax deduction appears to create a great deal of tax shifting and has meant significant declines in revenue. We believe it will prove more sustainable to lower these deductions and give Ohio’s tax brackets an across-the-board rate cut. The Senate should explore other areas, such as phasing down the property tax rollback by one or two percent, to offset revenue losses and pay for an across-the-board rate cut. A one percent rollback reduction, for instance, could yield tens of millions in savings over the biennium, and a two percent cut could save over $100 million.

Currently, the state pays 10 percent of property taxes for all Ohioans, and for those who live in their home the state pays an additional 2.5 percent. Thus the state sets aside more than $1.8 billion in general revenues each fiscal year to reimburse local governments for local decisions. Since the property tax rollback program was adopted when Ohio began imposing an income tax, the amount spent on the program should be cut as Ohio’s income tax declines. The Senate also should consider means testing the rollback beyond our suggested phased-in reduction.

Finally, because Ohio’s municipal tax structure remains a daunting labyrinth, especially for smaller businesses, The Buckeye Institute recommends returning to the Governor’s proposed municipal income tax reform. Should it remain optional for businesses to file net-profits municipal income taxes, however, we encourage the Senate at least to guarantee that taxpayers do not pay an administrative fee for filing net-profits taxes.

The Senate should retain the basic outline of the current education budget but should not increase appropriations beyond those made by the House. We would urge the Senate to return to the Governor’s proposed appropriation levels and remove “safe harbor” provisions that unfairly restrict eligibility for EdChoice scholarships.

The House budget rightly embraced the contours of Governor Kasich’s education proposal that begins unwinding the “caps” and “guarantees” that distort the Foundation Funding Formula. Money should follow students and not just be used as a mechanism for funding the education “system” and its ever-expanding bureaucracy.

The Senate should also eliminate or reform the current “safe harbor” provision that denies parents school-choice options by preventing hundreds of schools across the state from being eligible for EdChoice scholarships.

We think that the Senate should embrace the House budget’s language on Medicaid and state innovation waivers—including resubmitting the Healthy Ohio waiver—and add deadlines for submitting those waivers to the U.S. Department of Health and Human Services (HHS). Additionally, the Senate should include language that maintains the Administration’s flexibility to improve Ohio’s health care system.

Ohio’s 2015 budget instructed the Kasich Administration to seek a state innovation waiver granting some freedom from onerous regulations under the Affordable Care Act. The new Secretary of HHS has encouraged states to pursue innovation waivers and the Senate should expand on 2015’s waiver instructions and encourage Mr. Kasich’s Administration to pursue waivers that will lower premiums. The Senate should include a reinsurance component similar to the waiver submitted by Alaska (and touted by HHS) that could reduce insurance premiums for Ohioans.

Some providers are understandably concerned about Governor Kasich’s proposal to shift many aged, blind, and disabled Medicaid recipients into managed care. This process should be closely monitored and evaluated, of course, but continued delay will likely mean higher costs and less coordination of care, and we recommend adopting the Governor’s proposal in this area.

The Buckeye Institute supports the Department of Rehabilitation and Correction’s budget proposal dealing with the TCAP program. As we testified before the House, we support policies that would rehabilitate low-level offenders in their communities. The Senate should return to Governor Kasich’s proposal or, at the very least, should maintain the proposal in the House budget.

Rehabilitating low-level offenders in the community is twice as effective as state incarceration at one-third the cost, and watering down the TCAP provisions even further would significantly dilute the policy’s potency.

The Senate should further reduce the Local Government Fund (LGF). The House appropriations call for $388.1 million in FY18 and $393.5 million in FY19. The Buckeye Institute has suggested eliminating the LGF entirely, which would save more than $781 million over the coming biennium. At the very least, we think that the Senate should return to the Governor’s proposal and direct LGF dollars to those communities that have the greatest difficulty raising requisite revenues locally.

Separately, the Senate should not increase or make permanent distributions to counties for lost sales tax revenue due to the eliminated Medicaid Managed Care Organization tax.  Those tax dollars were windfalls that counties obtained through piggyback sales tax systems. If new funds are needed to pay for local issues, then those dollars should be raised at the local level and not become a Columbus-based subsidy that obscures the true cost of local government from local taxpayers.

To help more Ohioans secure gainful employment, the Senate should eliminate, or at least reduce, state-imposed hurdles and licensing fees strewn throughout the House’s budget.

The Senate should also include language from the 131st General Assembly’s Senate Bill 329 that would require the state to seek the “least restrictive form of regulation” for occupational licensing. This would clarify Ohio’s interest in maintaining public safety without denying people employment prospects and opportunities. This language cleared both chambers of the General Assembly last year, and Governor Kasich’s veto concerned SB 329’s agency sun-setting provisions and not the “least restrictive form of regulation” language.

In conclusion, despite economic headwinds and clouds still looming along the horizon, Ohio has improved its prospects for job- and income-growth. As the first green shoots of growth begin to blossom, the biennial budget provides Senators with the perfect opportunity to set a bold course for Ohio’s prosperity.

Thank you for your time and attention today. I would be happy to answer any questions that the Committee may have.

Piglet Book® is a registered trademark of Citizens Against Government Waste and is used with their permission.