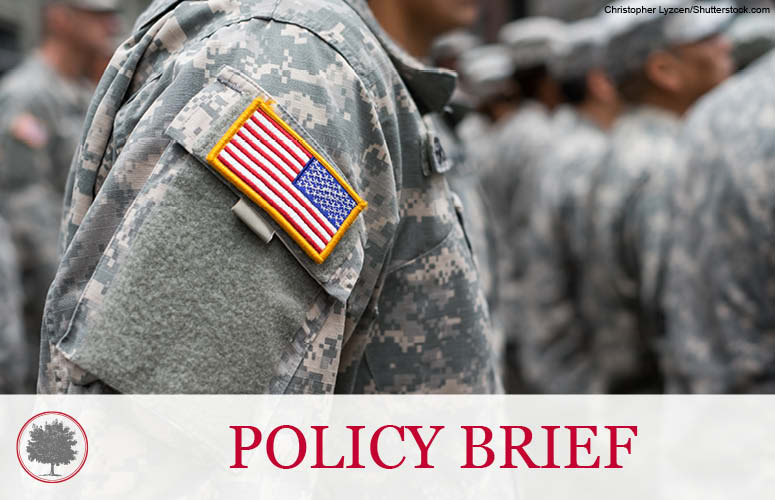 Ohio must reform its occupational licensing regulations.  Occupational licenses limit opportunity, competition, and the earning potential for many qualified professionals.  Ohio has a particularly onerous licensing scheme that does not readily recognize occupational licenses earned and issued in other states.  Often, Ohio requires additional schooling or new, costly licenses for professionals already licensed or certified in other states. These bureaucratic restrictions place a disproportionate burden on military families and spouses who move frequently from state-to-state while serving our country.

On average, military families move once every three years.[1] Such frequent relocation understandably affects job prospects and opportunities for military spouses and family members. A recent report by the Institute for Veterans and Military Families shows that the unemployment rate among female military spouses ages 18-24 has increased dramatically from 15 percent to 30 percent over a 12-year period.[2] By contrast, the unemployment rate for civilians has fluctuated between 8-12 percent during the same period.[3] The difference suggests that military spouses have a disproportionally difficult time finding civilian employment.

Strict occupational licensing requirements, like those imposed in Ohio, only make a bad problem worse, and can prove especially discouraging for military families trying to make ends meet. Unfortunately, Ohio is one of the worst states when it comes to making it simple for working military spouses and family members to join the state’s labor force.  Some state licensing regulations, for instance, impose additional education requirements that may take more than one or two years to complete—an impractical burden for spouses who may spend only a few years in the Buckeye State.  And the state’s refusal to recognize out-of-state occupational licenses simply adds insult to injury.

Currently, Ohio requires military spouses licensed to perform work in another state to secure a temporary license while they wait for one of Ohio’s licensing boards to approve their out-of-state license. A licensed dietitian, for example, moving to Ohio must satisfy list of bureaucratic requirements just to receive a six-month temporary license.[4] During those six months, the Ohio Board of Dietetics will evaluate the out-of-state credentials before granting an Ohio dietetics license.  But if the temporary license expires before the Board issues an Ohio license, the applicant is out of luck and the temporary license cannot be renewed.  Moving from state-to-state is challenging enough without having to worry about whether licenses, credentials, and certifications earned in one state will be recognized in another.

The Institute for Veterans and Military Families revealed that 73 percent of military spouses with an occupational license require a renewal or reissuance of their license after being transferred to a new state.[5] To help alleviate this burden on military spouses, the Defense Department has recommended modifying out-of-state licenses by “endorsement,” allowing a state board to recognize active credentials from another state.

Some states have already begun to address these types of concerns. North Carolina, for example, passed House Bill 799, which expands the state’s definition of “applicable experience” and allows its state boards to accept other demonstrations of competency.[6] These reforms will make it easier for military spouses to work and utilize their professional skills in the Tar Heel State. Similarly, New York has taken the initial steps of attempting substantial reform in its occupational licensing laws through Assembly Bill 3637 that[7]:

Unlike Ohio’s use of temporary licenses for military spouses, New York is working towards a more comprehensive approach to addressing licensing burdens for military families. Investigating the difficulties experienced by military families will shed additional political light on the systemic problem so that further reform can be achieved.  And recognizing the out-of-state licenses and credentials for military spouses is a far more robust solution than Ohio’s six-month temporary licensing scheme that leaves workers wondering if their applications will be approved in time.

Ohio policymakers must understand that free markets require equal opportunity and marketplace competition.  Occupational licensing laws stifle both opportunity and competition through bureaucratic requirements that create barriers to employment and enterprise. Meaningful reform is long overdue and Ohio should follow New York’s lead in pursuing bold initiatives.  For starters, recognizing out-of-state licenses for military spouses will make it easier for military family members to secure and maintain employment. This, in turn, means more economic opportunity for the spouses of our military servicemen and women, and more workers in Ohio.  By restoring economic opportunity, Ohio stands to gain a better, more skillful labor force, a more robust tax base, and lower unemployment, while relieving bureaucratic burdens for families who already sacrifice so much for their country.