Columbus, OH – On Tuesday, The Buckeye Institute testified (see full text below or download a PDF) before the Ohio Senate Workforce and Higher Education Committee on the policies in Senate Bill 131, which would ease worker shortages and encourage skilled workers to pursue their careers and professions in the Buckeye State—an integral component to modernizing Ohio’s outdated economic system. 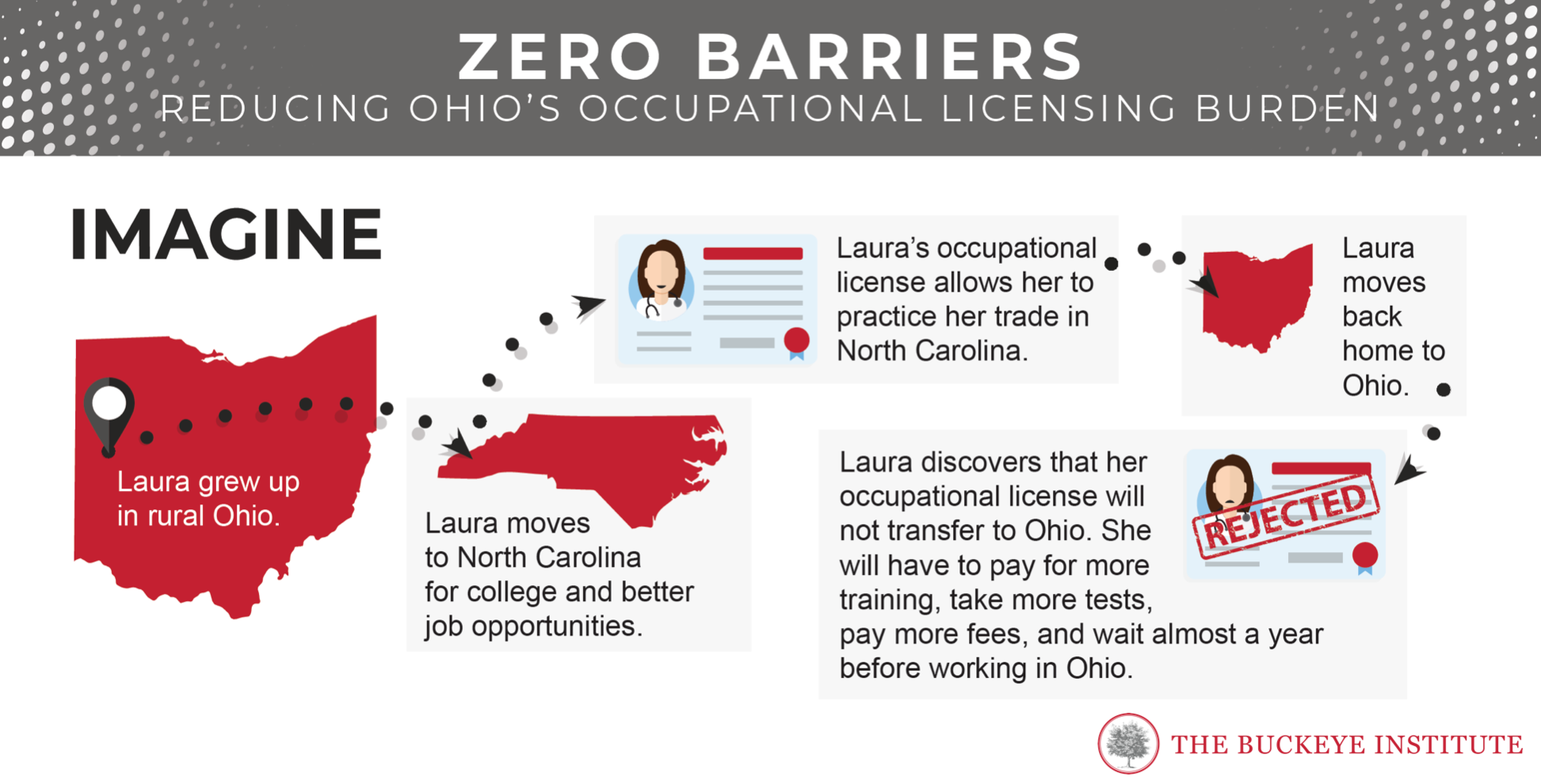 Noting that “[w]ould-be Ohioans with similar licenses in good standing should not have to pay additional fees or take expensive, extraneous classes that do not make them any more qualified for or capable of doing their jobs.” Lawson highlighted that Senate Bill 131 “would eliminate employment barriers, make Ohio more ‘open for business’ for licensed professionals, and still protect public health and safety by ensuring that any necessary Ohio-specific knowledge is obtained and demonstrated.”

Lawson urged lawmakers to follow the lead of the 16 states that adopted universal occupational license recognition.

As Prepared for Delivery

Thank you, Chairman Johnson, Vice Chair Cirino, Ranking Member Williams, and members of the Committee, for the opportunity to testify regarding Senate Bill 131.

My name is Greg R. Lawson. I am the research fellow at The Buckeye Institute, an independent research and educational institution—a think tank—whose mission is to advance free-market public policy in the states.

Occupational licensing laws especially burden military families as they move about the country, but they are not the only professionals who suffer when trying to make Ohio their home. Ohio’s current occupational licensing regime prevents many trained, licensed professionals from pursuing their careers here. Onerous licensing provisions require already-licensed workers to ask Ohio for permission to earn a living.

As The Buckeye Institute explained in Forbidden to Succeed: How Licensure Laws Hold Ohioans Back, high fees and training requirements reduce an occupation’s job growth by 20 percent because prospective workers who cannot afford to enter the occupation remain unemployed or underemployed. And Professor Morris Kleiner, the AFL-CIO chair in labor policy at the University of Minnesota’s Humphrey School of Public Affairs, has testified that he and Alan Krueger, the former head of President Obama’s Council of Economic Advisors, calculated that licensing laws cost between a half and one percent of jobs nationally in 2010.

Dr. Kleiner and his co-author also estimated that Ohio lost more than 67,000 total jobs due to occupational licensing. And for good reason. Occupational licensing restrictions make Ohio less competitive, less prosperous, and less attractive to entrepreneurs and their employees—telling skilled workers, in effect, your skills and training are insufficient here. Consider, for example, that an Ohio HVAC contractor must have five years of experience before being licensed here, but Michigan and Kentucky only require three and four years, respectively. Meanwhile, Illinois, Indiana, Missouri, and Pennsylvania have no state HVAC licenses at all, relying on local regulations instead.

Such job loss likely contributes to the state’s emigration problems. In survey after survey, Ohio still ranks among the top ten states with the most outbound migration, an exodus that has cost Ohio yet another congressional seat. Changing the occupational licensing regime will help reverse this trend.

In Universal Licensing Reciprocity: How to Welcome Workers to Ohio and a related one-pager, The Buckeye Institute extolled the benefits of Senate Bill 131’s universal occupational license recognition that will make it easier for people with comparable out-of-state licenses to start or continue their careers in Ohio. Would-be Ohioans with similar licenses in good standing should not have to pay additional fees or take expensive, extraneous classes that do not make them any more qualified for or capable of doing their jobs. Instead, Senate Bill 131 would eliminate employment barriers, make Ohio more “open for business” for licensed professionals, and still protect public health and safety by ensuring that any necessary Ohio-specific knowledge is obtained and demonstrated. And Senate Bill 131 would ease the COVID-19 related shortage of healthcare workers including physicians and nurses.

This Committee has reduced permission-slip burdens imposed on workers before, establishing the occupational licensing review process under Senate Bill 255 of the 132nd General Assembly—also championed by The Buckeye Institute. Senate Bill 131’s licensing recognition builds upon that vital effort and will help Ohio by helping would-be Ohio workers pursue their careers and professions here.

Thank you for your time and attention. I would be happy to answer any questions that the Committee might have.